Nawazuddin Siddiqui is hitting the headlines for all the wrong reasons. After his wife sent a legal divorce notice to him, the actor hasn't responded to it till date. On the other hand, his wife, Aaliya Siddiqui has been making shocking claims and allegations against him in various media interviews. In a fresh set of allegations against Nawazuddin, Aaliya has mentioned that Nawazuddin has stopped supporting her financially. In an interview, she mentioned that she had to sell off her car to meet her children's needs.

"The monthly allowance which he used to give for his kids, he has stopped giving me. We are facing a lot of problems. My kids go to an expensive school and I am unable to fill their fees. Nawazuddin and I have received emails from the school but he hasn't responded to that also. I feel he is giving me financial problems so that I get weak and stop fighting for myself," she told.

According to Aaliya, she sold her car 15 days back as she had to pay for the maintenance of her house and her lawyer's fees. She admitted that she has asked for money from Nawazuddin for her kids as she wants their future to be secure. She claimed that the way he is treating the kids, she doesn't feel he will take care of them. And hence, she has demanded a fixed deposit for the same.

However, in the clause, she has mentioned that the fixed deposit can be removed by her or Nawaz for personal reasons.

It was on June 14, when Bollywood actor Sushant Singh Rajput's sudden demise made headlines. The actor died by suicide and was found hanging from the ceiling fan at his Bandra residence. Sushant was considered as one of the most promising actors of Bollywood. The void that he has left behind will not be filed. The actor's last film Dil Bechara co-starring Sanjana Sanghi has been making headlines since the actor's passing away. Earlier, his fans were demanding the film to be released in theatres but now, the makers have decided to release it on the OTT platform.

On June 25, the producers of the film took to social media to make the official statement. The official handle of Fox Star Hindi tweeted, "A story of love, hope, and endless memories. Celebrating the late #SushantSinghRajput's legacy that will be etched in the minds of all and cherished forever. #DilBechara coming to everyone on July 24. For the love of Sushant and his love for cinema, the movie will be available to all subscribers and non-subscribers."

Post which, his fans and industry friends have been showing their eagerness for the movie. Celebrities like Shraddha Kapoor, Kartik Aaryan, Arshad Warsi, and others took to social media to pay emotional tribute to Sushant's last film.

Television actor Arjun Bijlani wrote, "Can’t believe this is your last film everyone will watch. Hope u have found peace. Will remember your hardwork and the will to be on top. That’s how I am going to ...still (broken heart emoji)."

Arshad Warsi took to Twitter and retweeted director Mukesh Chhabra's post for Sushant and wrote, "Wish you and Sushant all the success in the world buddy. Sushant will always be alive and smiling in our hearts..."

Sushant's Dil Bechara co-star Sanjana Sanghi wrote, "A story of love, of hope, and of endless memories. Celebrating our dearest, and the late #SushantSinghRajput's legacy that will be etched in the minds of all and cherished forever." 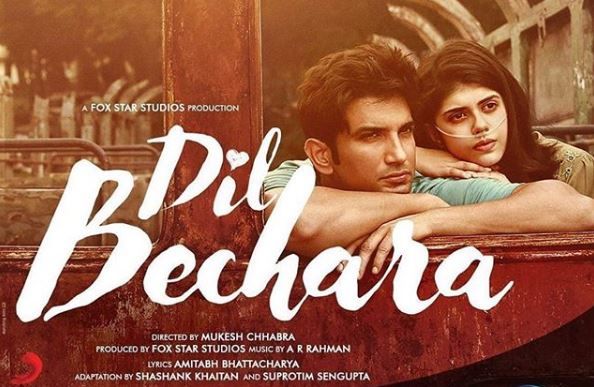 People had not yet recovered from the grief of the death of Bollywood actor Sushant Singh Rajput that the news of the suicide of another tick talk star has come to light. Tiktok  star Siya Kakkar has committed suicide. At the age of only 16, Sia ended her life. However, the reason for his death has not yet been revealed.

According to reports, one night before committing suicide, Sia also spoke to her manager Arjun Sarin in connection with a song. Arjun told that while talking, Siya was fine and she did not seem upset at all, she also does not understand why Siya took this step.

Sad news 16 year old sweet tik-toker @siya_kakkar died by suicide . Before publishing this I spoke to her Talent management agency head Arjun Sarin who just spoke to her last night for a song collaboration and he says she was in a good mood and perfectly alright. Even he has no clue what went wrong that she had to go this way. You go through her videos and you can she was so good in her content, it's really sad that she chose this path. If you are feeling depressed please dont do this

This video was shared on Instagram a few hours ago:

His fans are surprised by the news of Siya's death. They cannot believe that Sia can commit suicide. His fans are paying tribute to him by commenting on his Insta videos. Siya was also very active on Instagram. She often used to share her videos and photos on Instagram for her fans.

Will The Sequel Of 'Rehna Hai Tere Dil Mein'? R. Madhavan Told The Fans The Truth

For the last few days, there was such a discussion on social media that the R Madhavan starrer film Rehna Hai Tere Dil Mein released in 2001 is going to be a sequel. After such news came more on social media, R. Madhavan has clarified about this and has told that now becoming Madhav Shastri for him is equivalent to wearing elephant tights.

Sharing a picture of himself and Diya Mirza, R Madhavan wrote in his tweet, "Friends I am hearing rumors about the sequel to Rehna Hain Tere Dil Mein Ke and I hope these are true because I have an idea about it No. Just praying that there will be someone somewhere who will have a script according to my age and Diya's age. "

The actor said, "... otherwise becoming Madhav Shastri is equivalent to wearing an elephant with tights." It is known that in the film 'Rehna Hai Tere Dil Mein', Madhavan was seen as a young boy and since then his weight has increased considerably. The film also had Saif Ali Khan who played the role of Rajiv Shyamarao.

R Madhavans upcoming films will be

Talking about Madhavan's work front, he was last seen in Shahrukh Khan starrer film Zero and Rocketree, Nishabdam and Silence are his upcoming films. He will soon be seen working in the Tamil film Mara.

Kangana is back to Manali says: With a Heavy heart leaving Mumbai

Ayushman Khurrana: Even on my birthday, I am going to train hard.

Singer Anuradha Paudwal's son Aditya Paudwal passed away at 35, due to kidney failure