Sushant Singh Rajput's last film Dil Bechara has been released on 24th July on Disney Plus Hotstar for free. Fans have been waiting for this film for a long time. After the release of the film, the fans are giving their reaction to social media. Fans are sharing every dialogue from Sushant's entry to his social media. Sushant's fans are getting very emotional about seeing the actor.

For one last time @itsSSR Every 1 of us was emotional. #DilBechara is a beautiful movie and just like your Kedarnath I would watch this countless times.. WHY ARE YOU SO SHORT LIVED, WHY! With teary eyes I bid you GOODBYE, My Favorite.... #DilBecharaDay #SushantInOurHeartsForever pic.twitter.com/4nCIwxDhz2

Can't get over you @itsSSR
Come back if possible, we love you#DilBechara will always be our favourite but only regret we have today is we couldn't help you when you were in need !! pic.twitter.com/TxLnNCDEoo

I'm speechless! #DilBechara#SushantSinghRajpoot you were amazing as always, it's still hard to believe that he's not with us to cherish this moment. You will be missed always! #Manny pic.twitter.com/LMVzGyr928

#DilBechara
An Excellent Film with an intrstng take on love,life and death.
Each Scene of this Movie is Phenomenal nd hd vry deeper meanings.
Last 20mints of this movie is highly emotional #SushantSinghRajpoot U will be missed man
Its True,For Those Who Love,Time is Eternal pic.twitter.com/Ps62Pv6oma

#DilBechara
I don't know about the others but I'll miss you Immanuel Rajkumar Junior ( #SushantSinghRajpoot ) pic.twitter.com/PpjwTePQQY

Please tell that Sushant committed suicide on 14 June in his Mumbai home. No one knows why Sushant did this. The Mumbai Police is investigating the matter. Till now many people have been questioned in this case, but the cause of Sushant's suicide has not yet been known.

Karan Johar Controversy | Shatrughan Sinha takes a dig on 'Koffee With Karan', says These kind of planned events cause controversy

Filmmaker Karan Johar's chat show Koffee With Karan has always been surrounded by controversies for one reason or another. It is most famous for its scandalous quotes and attention-grabbing statements that Bollywood stars have made in the past. Although there is no news of its latest season, KWK recently grabbed the spotlight after veteran Bollywood actor Shatrughan Sinha spoke something against it.

Amid the insider vs outsider debate that's going on in Bollywood post Sushant Singh Rajput's untimely demise, many B-towners including Karan Johar have been receiving flak for the same. After Kangana Ranaut targetted KJo in her latest interview, Shatrughan Sinha has also taken a dig at the filmmaker and his popular show Koffee With Karan.

While speaking to a leading news channel, the actor got candid and said that there was no such show like this in their era. He also stated that the film industry is no one's property.

"During our time, we have no such shows as 'Koffee with Arjun'. These kinds of planned events lead to different kinds of conversations and become a talking point. As far as those who are being talked about at the moment are all members of our own society, but film industry kisi ki jaagir nahi hai," said Sinha.

He further stated that who are you to say "boycott this person" or "remove this person from the industry." The actor then questioned, "How did you enter the industry and what have you done in life?"

Earlier, while giving an interview to the same channel, Kangana had blamed Bollywood biggies like Aditya Chopra and Karan Johar for the Kai Po Che! actor's demise.

Meanwhile, Mumbai Police is still investigating SSR's case. The latest development related to the case states that the 34-year-old was sidelined during the promotion of his films Raabta and Kedarnath. More information is awaited.

The news of the untimely demise of Sushant Singh Rajput sent shockwaves across the nation. The actor, 34, died by suicide on June 14. The actor's ardent fans, family members, friends and colleagues from the film industry were left in deep shock. Many of them mourned the loss on social media and remembered how wonderful a person Sushant was and how talented he was as an actor. While the void still remains, the actor's fans are eagerly waiting for today evening to watch his posthumous release, Dil Bechara.

Helmed by casting director Mukesh Chhabra, the film co-stars Sanjana Sanghi in the lead opposite the late actor. Even though Dil Bechara is based on John Green's The Fault in our Stars, cine-lovers can't wait to see the screen adaptation of the much-loved film.

But ahead of the release, the entire film industry has united to spread awareness about the film's release. From Anushka Sharma and Ayushmann Khurrana to Varun Dhawan and Kartik Aaryan to Sara Ali Khan and Mrunal Thakur; many Bollywood actors have been taking to social media sharing special messages ahead of the film's release.

Rajkummar Rao, who had worked with the late actor in his debut film Kai Po Che!, wrote, "#DilBechara. Lock the date guys. Let's all watch it together, same time, different places but as one audience in whole. This one for our #Sushant." Sara Ali Khan, who was seen with Sushant in her debut film, Abhishek Kapoor's Kedarnath, and understands the late actor's fascination with space, penned a sweet message for his fans. "One last glimpse of our shooting star. Sushant Singh Rajput #DilBechara."

Here, check out how Bollywood has united to promote Dil Bechara on social media:

Dil Bechara will premiere at 7:30 pm on Disney+ Hotstar. As a mark of respect for the late actor, the makers have made the film available to non-subscribers for free. So no matter where you are, all you need is a laptop, mobile or a television set, along with an internet connection to watch the film!

Hina Khan wants to be with her Beau Rocky 'now and forever', latter's reaction is all love

Hina Khan is one of the most talented stars of the telly industry. She rose to fame with her character of Akshara Singhania from Karan Mehra's Yeh Rishta Kya Kehlata Hai. Indeed! She made a household name for herself with her role as a quintessential bahu, from the serial YRKKH. Later, she participated in Bigg Boss and ever since, there's been no looking back. Her popularity has been soaring high with every passing day. Hina has 8.6 million followers on Instagram and the talented diva knows the art of winning hearts of her fans.

To talk about Hina's personal life, she is in a relationship with Rocky Jaiswal whom she had met on the sets of her show YRKKH. He was the supervising producer back then. It's been more than eight yearss since the couple has been in a relationship and they continue to shell out relationship goals, even today. The couple is often seen posting mushy photos with each other on their social media feed with super-romantic captions. Wait until you check out Hina's love message in her latest post for Rocky.

Hina shared an emotional post for Rocky which talks about the timeless bond they share. The Hacked actress shared a monochrome photo where a young and an old couple are seen walking on a bridge. The actress captioned the photo as, "With you @rockyj Now and Forever". The original caption on the post was, "Life in one photo". Her boyfriend replied by saying, "Yes! Us against the world.” Meanwhile, Hina has been also inspiring fans in terms of fitness. She believes in doing weight training, pilates and eating healthy. However, looks like her boyfriend wants her to eat junk food. Hina tok to Instagram, yesterday to drop a photo of a plate full of desserts and captioned it saying,  "Bring on the cheat meals You are spoiling me @rockyj1". 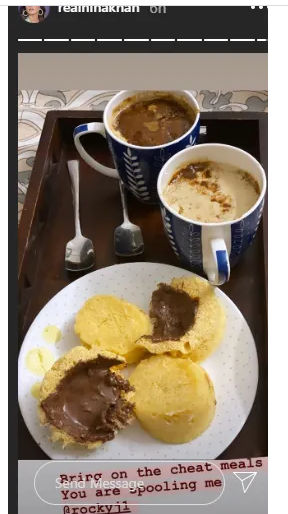